When the Plague Came to Eyam: Four Lessons for the Church in a time of COVID-19 The plague came to Eyam in September 1665, when a tailor’s assistant named George Viccars spread out a bale of damp cloths to dry in front of the fire, releasing a swarm of plague-infected fleas. By the end of the year, 42 of the villagers had died and by the spring of 1666, people were making plans to flee the village and seek shelter elsewhere.

It was at that point that the village’s rector, William Mompesson, intervened, persuading the remaining inhabitants of the village to make a fateful choice: instead of relocating in the hope of finding a safer place to live in one of the neighbouring villages, they would remain and self-isolate, quarantining the entire village from the rest of England to avoid spreading the plague to others. Over the course of the next fourteen months, the plague raged on, exacting a horrifying death toll among them. According to one account, only 83 ended up surviving out of an original population of 350 who had decided to stay, but their decision to remain and risk death together saved the lives of countless others to whom they might otherwise have spread the plague.

"Instead of relocating in hope of finding a safer place they would remain and self-isolate, quarantining the entire village from the rest of England to avoid spreading the plague."

The story is a moving and memorable one at many levels, but for Christians living in a time like ours, there are some particular lessons to learn from the way in which the villagers and their minister (along with his wife, Catherine, and his predecessor Thomas Stanley) responded to the crisis. They were, no doubt, all flawed and imperfect people, but their response to the plague was deeply imprinted with the grace and power of the gospel.

Four aspects of their response stand out for me as an example worth imitating in our own time.

Mompesson’s earliest attempts to offer care and leadership among his parishioners in the midst of the emerging crisis were frustrated by a seemingly irresolvable problem: many (perhaps most) of them did not recognise him as their minister at all. The year before the plague arrived, Mompesson had been imposed upon the villagers, against their will, as their new rector. The village had been a stronghold of Puritanism and their previous minister, Thomas Stanley, a keen supporter of Oliver Cromwell and his government. When the monarchy was restored and the Prayer Book reimposed, Stanley was ejected as rector because his conscience did not permit him to conform his ministry to its rites and ceremonies.

The crisis of the plague did not dissolve Stanley’s convictions—he remained as unable as he had always been to give his consent to the Anglican forms that were a requirement for ministering in the established church. But it convinced him that he and his successor needed to stand alongside each other as partners in the gospel, whatever differences they had on other matters, so that Mompesson could do the job that he had been entrusted with and the villagers would not be left bereft of the gospel’s challenge and comfort.

It was not just harmony and good order that the villagers (and their minister himself) needed. In the face of the crisis—confronted by stark choices, battered by waves of grief and fear, and faced with the imminent prospect of death—what they needed more than ever was the gospel. And whatever other differences Mompesson and Stanley had, they were in agreement on that.

A revealing glimpse into the hearts of Mompesson and his wife, Catherine, can be seen in the long letter that he wrote to his children to tell them the news of their mother’s death, and to give them a description of her that they could grow up remembering. (The children had been sent away to a relative’s place in the early days of the plague.) Much of the letter is about her character: her courage and kindness, her generosity to others, the way in which she “asked pardon of her maid-servant for having sometimes given her an angry word.” But it also dwells at length on the way in which she confronted her death—racked by fevers, slipping in and out of delirium, but crystal clear and confident on matters such as “by whom, and upon what account, she expected salvation, and what assurances she had of the certainty thereof.”

If ever there was a time for gospel clarity, this was it.

The same circumstances that underlined the importance of clarity about the content of the gospel also amplified the need for flexibility in the strategies used for communicating it. In early May 1666, as the spring weather began to warm up and the rates of plague transmission accelerated, Mompesson and Stanley began introducing new measures for how they would conduct their ministry. Church services were taken out of doors, to a natural amphitheatre called Cucklett Delph on the village outskirts; the congregation was spread across the hillside, seated at a safe distance from one another to minimise the risk of contagion; additional outdoor gatherings for prayer took place under similar arrangements, three times a week. Ways of doing things that had remained the same for hundreds of years were changed in the space of weeks, so that men and women could continue to serve and encourage each other, join with each other in calling on God, and remind one another of the gospel that they needed to hear again every day.

"The gospel left its imprint on their lives—in the big decision to risk death for the sake of others, and in the countless small decisions that individuals made during the fourteen months that followed."

And the gospel left its imprint on their lives. It did so in the big decision, to band together as an entire community and choose to risk death for the sake of others rather than clinging on to their own lives at others’ expense. And it did so in the countless small decisions that individuals made during the fourteen months that followed—tending to the dying, taking on the care of those they left behind, rearranging life into new configurations with every week that went by, all under the shadow of death, and all in the hope of the resurrection.

We do not yet know what is ahead of us in the coming months, as the story of the COVID-19 pandemic plays out among us. We pray, of course, that we and others may not have to face anything anywhere near as dreadful as the events experienced by the people of Eyam in the year of the plague. But we pray, too, whatever our experience ends up being, that the way in which we respond to it may be as deeply imprinted with the gospel as their response was.

This article was first published by The Gospel Coalition (Australia) at https://au.thegospelcoalition.org/article/when-the-plague-came-to-eyam-four-lessons-for-the-church-an-a-time-of-covid-19/   Reproduced with permission. Photo by Donald Judge, flickr

If you'd like to grow in your faith and be equipped for God's work, find out more about our courses in Bible, Ministry, Theology, Counselling, Chaplaincy, Education or a Plunge gap year after your HSC - send us an enquiry or visit our website.

David Starling joined the Morling faculty in 2005. He teaches New Testament, Greek and Theology, and serves as the head of our Bible and Theology Department. David studied at the University of Sydney and worked as an English teacher in Western Sydney for three years, before completing theological studies. From 2000-2006 he was the pastor of Petersham Baptist Church. He and his wife, Nicole, along with their four children, attend Chatswood Baptist Church, where Nicole serves part-time as a member of the pastoral team. His publications include Hermeneutics as Apprenticeship (Baker Academic, 2016), UnCorinthian Leadership (Cascade, 2014) and Not my People: Gentiles as Exiles in Pauline Hermeneutics (BZNW 184; DeGruyter, 2011). 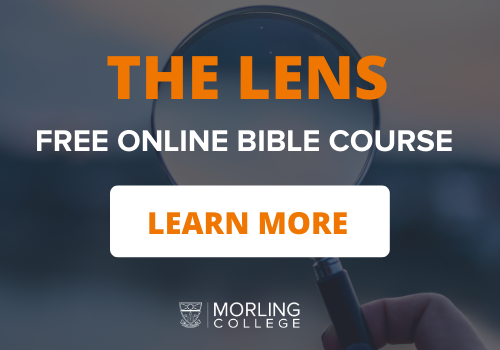